Shopping Cart
Your Cart is Empty
Quantity:
Subtotal
Taxes
Shipping
Total
There was an error with PayPalClick here to try again

Thank you for your business!You should be receiving an order confirmation from Paypal shortly.Exit Shopping Cart

Why I Hate Soccer

First, soccer has become a racist sport that produces prejudices of all kinds.  Very often, at stadiums all around the globe, but usually in Latin American countries, crowds will chant racial slurs at opposing teams simply because of the color of their skin.  I watched in horror a few years ago as a soccer game in England turned into a race riot, with Europeans calling the African team many racial terms that cannot be repeated here.   Furthermore, at the 2014 World Cup, a Neo-Nazi racist German fan insulted the Ghana team by running on the field with his face painted.  Also at the 2014 World Cup, the Mexican soccer coach actually defended the vulgar/dirty chant that Mexican fans love to yell at the opposing team's goalies.

The episode that really says it all is in regards to the Mexico vs. USA soccer match a couple years ago in Pasadena, CA.  Out of the 100,000 fans, 80% were cheering for Mexico - which is fine.  What is not fine was how they acted: booing the American National Anthem, chanting racial obscenities at the US goalie, etc.  Many more instances could be cited, but an honest soccer fan will admit that soccer produces nationalistic tendencies which often become racial prejudices. 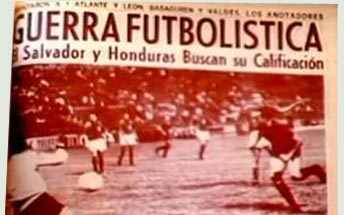 Soccer is also a very violent sport.  I know what you're thinking, "But so are football, hockey, and other American sports."  But, I am not referring to the sport itself, I am referring to the fans.  I could literally spend the remainder of this blog post citing instance after instance of violence at soccer games, even involving death.   Yes, some violence occurs at baseball, football, and hockey stadiums, but it's usually on the field between the players!   I have a theory as to why so much chaos happens at soccer matches:  Since the game itself is so boring for 90 minutes, the fans get frustrated just sitting there watching so they turn to other means of "entertainment."

One of the worst instances of soccer violence is when Columbian defender Andres Escobar was shot dead after the 1994 World Cup.  He was murdered by fans who were angry at him for accidently scoring a goal against his own team.

Of course, soccer probably has its roots in the old Mayan game of Pok-a-tok, in which the losing side would be executed!

Of course, soccer PLAYERS have been notoriously violent, too.  Recently, you may have seen the futbolista that enjoys BITING his competitors!  If you haven't seen it, watch it here. 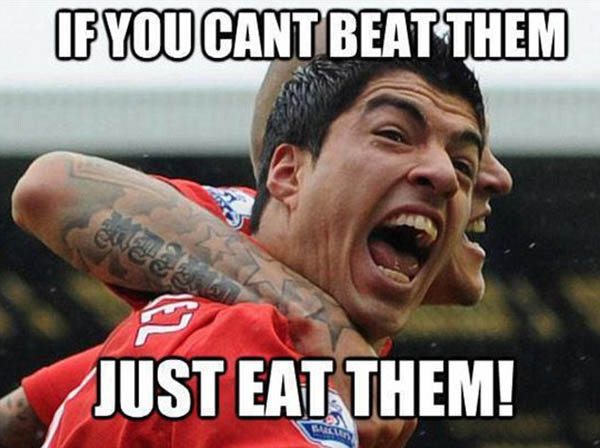 Soccer is also a deceiving sport.  It is filled with actors who pretend to be injured when they're not.  (PLEASE WATCH THIS VIDEO FOR PROOF).  Earlier this year, I made the mistake of turning on the World Cup and actually watched a few minutes of it (until I fell asleep).  I watched three players in three minutes roll around on the floor and pretend to be injured, and moments later each one of them was running around full speed with a goofy grin on his face as if no injury had ever happened.  Fakers!

Furthermore, soccer fans are particularly wacky.  Many weird events could be cited here as proof, but I will just mention a couple.  How about the fan that was recently killed by a flying TOILET BOWL!   Or how about the Columbian fans that brought their DEAD FRIEND to the game in a casket!  Read about it here. 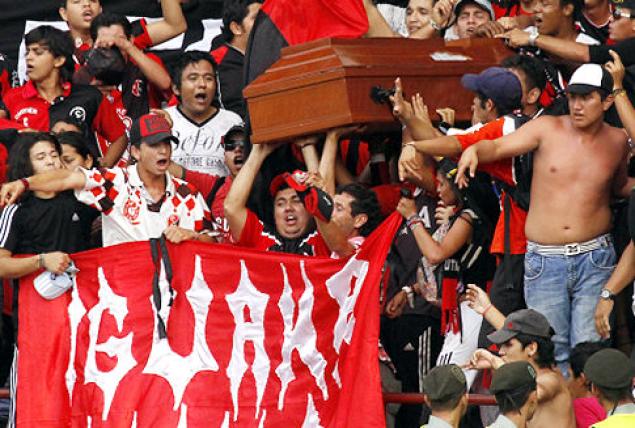 ANOTHER CLASSIC MOMENT:  Video footage showing players milling around a field during a club soccer match in Isfahan, Iran, captures several objects on the ground. Some of them appear to be trash or plastic bags. One of these objects though turns out to be an explosive.  The footage posted on YouTube shows a player picking up what is being described as a live “grenade” (although it doesn’t seem it is a grenade in the traditional sense of the word), seemingly not recognizing what it was, and throwing it casually off the field seconds before it went off.

I've seen soccer players do some of the most despicable acts I've ever seen in athletics... but this may be the worst!  Here's what happened:  A stray dog learned the hard way during a soccer match in Argentina that you apparently don’t interrupt lower-league player Enzo Jose Jimenez.  And what, exactly, did the Bella Vista player do about the match interruption? He picked the dog up by its neck and hurled it off the field, right into a fence!!  I would link you to the video of this, but it is too disturbing.

Here are some more fakers:  In one of the most deceiving acts I've ever seen, soccer fans at the 2014 World Cup showed up in wheelchairs pretending to be disabled... in order to get preferred seating!  ... and then would stand up and cheer when their team would score!  Read about it here.

Many soccer fans are particularly annoying.  Soccer fans always want us to think that soccer just needs a few more years and then "it's gonna get BIG in America!  You just wait and see!"   Well, your time is up... it hasn't gotten big.   Soccer fans love to say that millions of little kids are out there playing AYSO and that's their proof that soccer is on the rise in the United States.   The problem for soccer fans is that kids grow up and soon realize that other sports out there have more technique, intrigue, history, tradition, and fun than soccer.  I played soccer as a kid - my team was called Blue Thunder and I was a good player - then I discovered baseball and its richness as a game and I said bye to futbol forever.   Soccer fans also love to proudly yell that "Soccer is the world's favorite sport!" or something like that...  quite frankly, I don't really care what the world thinks when it comes to sports.   It isn't even in the top five sports in America... Football, baseball, basketball, hockey, NASCAR, golf, tennis, boxing - all of these are ranked higher in the United States.   Why should I care what the world thinks about favorite sports?   Most of these countries can't even elect capable leaders, so I don't trust them in choosing a sport.

OTHER PROBLEMS WITH SOCCER:

Soccer counts time the wrong way!!   I wish soccer would just grow up and have a COUNTDOWN like football, basketball, hockey, etc.

Soccer games can end in a tie!  Do I need to explain why this is annoying?  But EVEN WORSE than this is that teams often play TO tie!   You heard that right - teams actually play with the intention of getting a tie game!!   I can’t accept the idea that teams often play to tie. It goes against every aspect of my competitive athletic being.   You play to win the game!   I literally heard a soccer pundit on TV say that the US should tie Germany in their next match.   I understand that it’s early in the World Cup, and that teams undergo a prolonged feeling-out process because they know you can’t win the Cup in the first match but you can lose it. At the same time, seeing a team drop 10 defenders back in an effort to gain a single point in the standings runs contrary to the very notion of sport.

These are only some of the reasons I hate soccer ... enough for now.